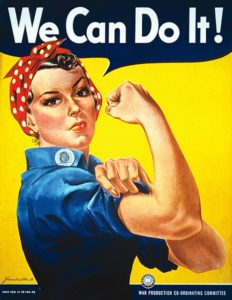 Who was Rosie the Riveter and what does she have to do with gages? Glad you asked!

History tells us that Rosie the Riveter represented many women… particularly, women who dug in and worked their tails off during world wars when most of the men of this country were off fighting for it. It is not arguable that without Rosie the Allies may have not been victorious in World War II. I have always been a history buff and World War II was of special interest to me—inherited this from my father. Mahar Tool was formulated very soon after this particular war from the efforts of James H. Mahar. Rosie sparks even more of an interest due to the fact that many believe the icon was actually “Rose Will Monroe, who worked as a riveter at the Willow Run Bomber Plant near Detroit. Monroe also was featured in a promotional film for war bonds.”

This is where I come in…

One of the many automotive plants I have had the privilege of calling on was the GM-Powertrain Plant in Ypsilanti, Michigan at Willow Run—formerly known as the “Hydra-Matic” plant, for you out there as old as I am. The plant was a very large manufacturing plant for transmissions for many years. Before it was a General Motors facility, the plant started out as a Ford assembly plant; this is when (shortly after the attack at Pearl Harbor in 1941) the plant began to manufacture B-24 bombers. The plant was one of the most productive in the United States until the end of the war.

For more than fifteen years, two or three times a week I would visit the Powertrain plant in Ypsilanti to meet with gage engineers, technicians, and buyers—this was before our current automatic manufacturing systems were the norm. There were several thousand varieties of gages in this facility and most were off-line fixture gages. These fixture gages checked every aspect of many different components necessary for the assembly of several different automotive transmissions. We at Mahar see off-line fixture gages still being used today at smaller, low production manufacturing facilities, an area we excel in on a daily basis. Mahar has numerous gage suppliers with many years of experience in designing and manufacturing these types of custom gages. We simply ask for a part print and we do the rest.

So why mention the history of this particular manufacturing plant? I’ll tell you why… you can still see remnants of the history of this plant when you walk on to the manufacturing floor. There are beams that have the Ford logo stamped into the steel, as well as names and signs of workers who were working on that same floor back in the early 1940s. I’m sure Rosie the Riveter’s ghost still roams those hallowed work stations—something that gives me a sense of pride being a Michigander!

Ask your Mahar salesperson for more info. The Gage Guy is at your service!